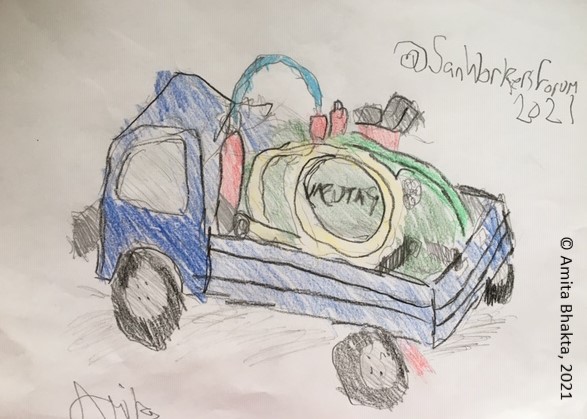 Day one of the Sanitation Workers Forum 2021

Dr Sally Cawood, conference chair, opened the first session of the forum, acknowledging the support from the Initiative for Sanitation Workers’ (International Labour Organisation (ILO), WaterAid, World Health Organisation, World Bank and SNV) and the committee introduced themselves and welcomed the attendees. Attendees of the forum heard from Kanika Singh, project manager at WaterAid India about the initiative’s aims to support and mainstream rights of sanitation workers in government policies, to support and promote research in this topic , supporting sanitation workers’s organisations in their initiatives to support sanitation workers, engage with relevant authorities, highlighting the coming session for the initiative during this forum (1st of December) as well as other projects to promote innovative occupational health and safety tools to improve the working conditions of sanitation workers. Dr. Andrés Hueso (WaterAid) thanked the committee on behalf of the Initiative for Sanitation Workers  for setting up the forum. The work of the World Bank on the rights of Sanitation Workers was highlighted by Awa Diagne. Introductions were made by Sally Cawood to Carlos (ILO), colleagues Kate and Abisola at the World Health Organisation (running a session on Wednesday 1st December) and Antoinette Kome (SNV), who also encouraged the attendants to engage with the forum.

The forum began with a keynote address from Bezwada Wilson from Safai Karmachari Andolan, a human rights organisation and community-driven movement in India working to eradicate manual scavenging. Wilson encouraged a diversity of efforts to support sanitation workers globally, and asked the key question of ‘who are the sanitation workers’ across ‘different forms, different countries,  different spaces’. He questioned the role of stakeholders in the persistent challenges faced by  sanitation workers and the need to tackle caste-based discrimination for sanitation workers to realise their rights. A poignant moment in Wilson’s address came when he labelled the exploitative working conditions of sanitation workers, who are clearly asked to remove human waste with their  bare hands as a form of ‘modern slavery’, which is only exacerbated by the financial and social burdens placed upon them and the ‘dangerous’ trends of pay and use toilet facilities. The capacity of sanitation workers to self-organise and form unions to advocate for their rights, is for Wilson, an area worthy of further attention. Wilson called for international NGOs and other organisations to clearly define their roles, not occupy the space that should be held and led by sanitary workers themselves, and to speak out against casteism and racism as the movement to support sanitation workers progresses. Wilson was also critical of some of the imagery used in international advocacy showing sanitary workers covered in faeces, and advocated for positive imagery, rather, of communities involved in such work in positions of power and authority. As Wilson summarised, when it comes to the rights of people involved in scavenging human waste, ‘treating another person not as an equal is in itself a crime’.

Following on the important discussion themes in the opening session, the first thematic session of the forum re-engaged with the topic of marginality and representation of sanitation work and workers. The session included four speakers, Dr Sheeva Dubey, Prabha Pokhrel, Festo Makoba and Asif Aqeel, and was co-chaired by Maisie-Rose Byrne and Dr Hemangi Kadlak. Dr Dubey started us off with a useful overview of the shifting discourses around, and approaches to manual scavenging in India, distinguishing between the Gandhian, Ambedkarite, human rights, technocratic and labour rights approaches to improving or eliminating the work. Relating directly to Wilson’s earlier points, Dr Dubey advocated for a mixture of an Ambedkarite and labour rights approach, that supports political self-representation and organisation of sanitation workers, and engages with the topics of caste and race head on. Prabha Pokhrel then shared work from the Brown Gold research project, focusing on shifting sanitary systems in Gularia Municipality, Nepal. Prabha mentioned that caste also played an important role in sanitary work in this context, with certain lower caste groups associated with the work. However, that this was also changing, with higher-caste groups entering waste work of different kinds. She also mentioned that, despite improvements, sanitary workers still lack adequate access to protective equipment and measures, insurance and remuneration. The next talk was from Festo Makoba, who shared insights from ongoing project work in Tanzania. Festo and team were training men and women entrepreneurs in construct construction (creating new job opportunities) using reusable materials (including plastic bottles). Festo reflected on a range of improvements brought about by different sanitary infrastructure, from DEWATS to simplified sewers, and the importance of organising these workers into Community Based Organisations (CBOs) and associations, that could seek registration from local authorities. Finally, Asif Aqeel shared some poignant remarks about the situation of sanitary workers in Pakistan. Drawing on their recent report on shame and stigma, Asif highlighted the intersections of caste and religion, with the majority of sanitary workers being dalit Christians. He shared real cases where workers had sadly lost their lives cleaning sewers, drains and manholes, including 70 reported deaths in Lahore in 2019 alone. Reflecting on the tragedy that can unfold when one worker falls unconscious to noxious gases in a manhole and others follow to rescue (only to succumb themselves), Asif remarked how “they are like soldiers who die for others”.

Dr Hemangi Kadlak provided a commentary to the four talks, reflecting on the common thread of caste, gender and marginality cutting across all presentations, and offered additional reflections on the challenges facing sanitary workers. Dr Kadlak then facilitated a lively discussion, including reflections on whether core principles in the Ambedkarite movement can be translated to other contexts (to interrogate caste, class and race) – something that international organisations can do more proactively – how sanitation work can be de-linked from caste or religion, and the importance of clarity in our discussions on different types of sanitary work (with differences from rural to urban, ‘traditional’ interpretations of manual scavenging in dry latrines, and new forms, including sewer, septic tank and pit emptying). Plenty of food for thought in this important and reflexive discussion.

Thematic Session 2: Setting the Scene- Lessons from India and Kenya

In parallel to session 1, session 2 drew on lessons learned from India and Kenya to set the scene for the debates of the forum. Drawing on examples from Karnataka, India, Samuel Sathyaseelan set out how since the COVID-19 pandemic began, unions of sanitation workers have made increasing appeals to high courts for improvements to their living conditions, appeals against a lack of access to compensation and highlighted a fragmented policy landscape. As Dr Ajay Koli aptly described it, the ‘manhole menace’ of cleaning and unclogging sanitation and sewer systems is an everyday reality of many workers, and a direct result of the many policies being created not being followed up by substantive action.   Natasha Sharma’s initial research observations begin to deepen the picture of the reality of day to day lives of manual scavengers in Kolkata. Manual scavengers‘ ‘struggles for citizenship’ are defined by their lack of access to facilities of their own and spatial segregation, fears of being penalised about the legality of their work and little awareness of their legal rights, limited occupational mobility due to existing social structures, and a view that they have a ‘generational duty’ coming from a lineage of scavengers to safeguard public health. The picture of pit emptying in Kenya painted by Yvonne Wamiru and Joy Riungu was one of challenges to worker safety due to occupational hazards and a lack of access to appropriate personal protective equipment.

Session 3 took attendees on a journey back in time, to understand the relevance of history to the working conditions of sanitation workers of the modern day rooted in migration and colonialism. John Uwa tracked pre-colonial to post colonial sanitary policies in Nigeria. John Uwa noted how water and sanitation policies have been shaped by a politics of dirt rooted in colonial practices, and a social hierarchy in relation to dirt where the rich blame the poor for waste piling up. The outcome of these tensions is strike action taken by sanitary workers retaliation. In India, the evolution and transition from formal to informal sanitation work and faecal sludge management in Alleppey was traced by Hariprasad from the 1800s to the present day, noting the historical discrimination of children of sanitation workers working in the dry latrines. Hariprasad noted how a journey from “formality to informality….and informality to illegality” is clear from the invisibility of the workers working in the night. Jo Beall’s reflections on working with Mansoor Ali, Haris Gadzar and Hussain Bux Mallah in Karachi highlighted how some things in sanitation work in Pakistan have not changed, in that the Chura and Hindus including Gujaratis living in Pakistan are still linked to waste work. ‘Wet – dry’ boundaries in the management of waste by religion persist. Change is visible however as Afghan refugees are now taking on more sanitation work in various cities. Jo reflected on how the stigma of untouchability needs to be promoted to promote the upward mobility of sanitation workers. Daniel Gerling provided perspective from the global North, noting how George Waring championed the separation of sewage/run off rainwater for disposal in the USA, becoming the celebrity face for championing the rights of those managing waste. Across the talks, the cross cutting theme is one of migrants still doing the dirty work. Hariprasad summed up how the social dynamics of who does the dirty jobs in India has failed to change significantly, despite an increase in new Bollywood films such as ‘Toilet: Ek Prem Katha”.

In a pre-recorded session, Dr Hemangi Kadlak was in conversation with Dr Sally Cawood. Dr Kadlak reflected on the motivations for her research on sanitation workers and manual scavenging in India.

A recorded conversation between Dr CS Sharada Prasad and Dr Jennifer Barr closed the first day of the forum, with Dr Prasad’s reflections on some of his most poignant photographs to date, the ethics of photography in documenting sanitation work, and where we go from here.

Key takeaways of the first day

The first day of the forum provided much to reflect on and has begun to further open up discussions around the ‘hidden’ or unseen sanitation workers, who are so critical to our public health and wellbeing. A recognition of manual scavenging as a form of modern slavery, representation of the different individuals involved in sanitation in different contexts and a reflection on the history of sanitation work are key learnings to take forward.