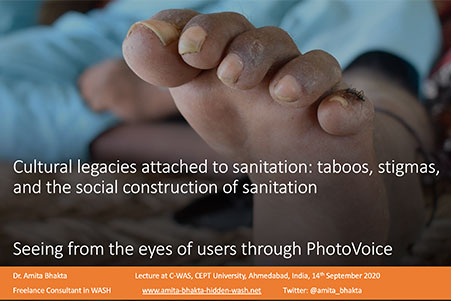 The relevance of PhotoVoice in understanding the cultural legacies of sanitation 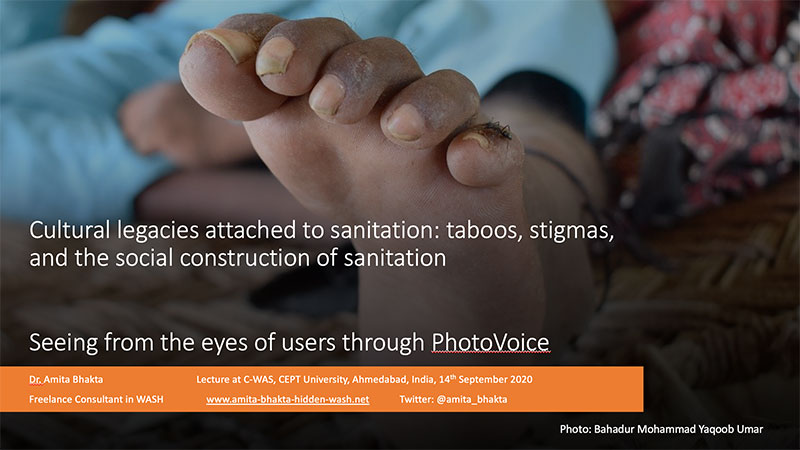 This is the first in a series of three blogs about my first experiences of teaching online in a new socially distanced world. I have learned that at times, being in lockdown can provide unique opportunities to reach out to people around the world through technology, which we otherwise would not have. On Monday 14th September, I had the pleasure of teaching a group of Masters of Urban Infrastructure students at the Center for Water and Sanitation (C-WAS) at CEPT University in Ahmedabad, India, virtually from the UK. In this blog, I give an overview of the two-hour lecture I gave on ‘Cultural legacies attached to sanitation: taboos, stigmas, and the social construction of sanitation – Seeing from the eyes of users through PhotoVoice’.

I have engaged with the use of PhotoVoice in the WASH sector over the past year, and earlier this year, I published a Learning Paper about uncovering WASH realities by using PhotoVoice based on a study commissioned by the Sanitation Learning Hub at the Institute of Development Studies. This Learning Paper became the foundation for the lecture at C-WAS on the theme of the ‘cultural legacies’ of sanitation. When I was first given the theme of the session, I soon realised that there were two components to explore: the data that can be produced through PhotoVoice on different cultural perspectives on sanitation, therefore looking at the user perspective on sanitation in low- and middle-income countries, and secondly, the practical aspects of using PhotoVoice as a method, and the researcher or practitioner perspective. I framed the lecture around the notion of hiddenness in WASH, and exemplified PhotoVoice as a useful technique to understand taboo issues in sanitation.

PhotoVoice enables people to facilitate change. Giving cameras to people provides a participatory technique for them to take photographs to illustrate their lives and to share their knowledge and expertise of their issues. PhotoVoice allows people to present their ‘voice’. Individuals can express their own perspectives on life and enable others to understand their issues. Photographs produced from PhotoVoice are used to elicit reflection and information on participants’ life experiences through interviews and group discussions, trigger debate, raise awareness and instigate social change. The photos are often presented to the wider community and policy makers through exhibitions, publications or public events. PhotoVoice is powerful because anyone, including women, children, those who cannot read or write or people with socially stigmatised health conditions but with the physical capacity to hold a camera, can learn to use a camera. Photos from PhotoVoice are often accompanied with quotes from the photographers, to describe what the photos are illustrating (Wang and Burris, 1997; Blackman and Fairey, 2014).

Case studies of exploring the cultural legacies of sanitation through PhotoVoice

In this lecture, I recalled how during my PhD studies, the overall traditional view of sanitation was one of being the ‘last taboo’ (Black and Fawcett, 2008), and something which was traditionally neglected. So when I was invited by C-WAS to give this lecture on cultural legacies of sanitation as seen through PhotoVoice, I had to consider: was the discussion on the overall cultural legacy of sanitation as we as professionals understand it, or are we talking about the user perspective? Through the session, I was trying to demonstrate to the students how knowledge can be very subjective and hidden, and encouraging them to keep this in mind throughout. Encouraging the students to reflect on this idea of subjective perspectives was very interesting: showcasing photographs from previous PhotoVoice work for them to analyse provoked different interpretations of the same pictures. PhotoVoice became clear as a useful technique to see the views of the user, who may show us things we do not expect. I drew on five examples of the use of PhotoVoice to explore different elements of sanitation and how different people can interpret the cultural legacies of sanitation through photos. Engaging with the methodology we are using, and the relevance of it for our work, is as important as the topic we are trying to research. Below are 3 of the examples, and you can read more in this learning paper.

Neglect of women’s ageing issues such as the perimenopause

In this lecture, I sought to demonstrate how PhotoVoice told me that for perimenopausal women, the cultural legacy of sanitation is that it is predominantly focussed on toilets and drains, but their pictures were showing me that bathing and laundry matter too. The cultural perspectives of sanitation this showed was that it does not consider women’s issues across the lifecourse, nor all aspects of hygiene, and taboo ageing-related topics such as perimenopause and menstruation. I used this case study as a way to help students to understand PhotoVoice as a tool to uncover less discussed issues which we as a WASH sector do not know so much about.

WASH and disability in Malawi

The class also explored the cultural legacies of sanitation for people with disabilities as illustrated through the PhotoVoice exercise conducted by Sian White and colleagues in Malawi (White et al, 2016). PhotoVoice was used with 5 people with various motor and intellectual disabilities, who were asked to photograph the most difficult parts of the day, which were then ranked by severity. The photos illustrated the challenges of carrying water for amputees, and how pipes and rocks act as a barrier for wheelchair users. Through these findings, the class were able to understand how Photovoice how the layout of water and sanitation infrastructure creates barriers to accessibility. It was important to highlight through this session how PhotoVoice can enable those who are usually left behind in the community to communicate their perspectives to decision makers. The participants were able to showcase their photos at exhibitions in Malawi and at World Water Week. It was important to include this case study as part of the lecture to demonstrate the relevance of PhotoVoice to inform decision making in WASH, even if, as was the case in this study, it does not lead directly to changes at a policy level.

In the lecture we also covered the study by Zara Ansari as part of her Masters research at the London School of Hygiene and Tropical Medicine on the experiences of people with incontinence and their caregivers in Pakistan (Ansari, 2017). In a video featuring Zara in the lecture, she discussed her research which explored the role of incontinence and the taboos surrounding it in the experiences of people with incontinence and their caregivers in the Sindh province of Pakistan. Zara spoke to the class about how she found the PhotoVoice element as the most exciting part of the work. She took two persons with disabilities from an urban setting and two from a rural setting, asking them what was good for them about their day and what was really challenging for them. The results of Zara’s research were interesting as the PhotoVoice demonstrated powerful reflections on such a taboo subject where there are no words for incontinence in the Urdu language. Being able to talk about it through pictures where they were pretending to refuse food because they did not want to use the bathroom, or marks in the ground where they had defecated because they were not able to reach the toilet, was a very powerful mechanism for understanding these experiences. It was important that the people experiencing incontinence were able to direct their caregivers to take the photograph they wanted. Whilst the caregivers or Zara were able to take the photos, it needed to be directed by the people with incontinence in order to convey their perspective. PhotoVoice brought out topics which had been touched upon in interviews, such as refusing food, in a very powerful way. Until Zara and her team had received these pictures, they did not fully appreciate the experiences of incontinence for these people.

It was important that as the lecture came to a close, we were able to share what we had learned through the session. It was notable how students were able to reflect and consider how PhotoVoice can be useful for them to use in their research to explore less explored issues, which is an indication of how important it is to introduce different methods to students to increase their awareness of hidden issues in sanitation. We recognised as a group the importance of different perspectives on the same issue in order to provide inclusive sanitation for all. What became clear in this lecture was the emphasis on subjective knowledge and the individual viewpoint as shown through PhotoVoice. Through the eyes of the user, students recognised how the cultural legacy of sanitation is varied according to person. In the next blog of this series of three, I reflect on the experiences of teaching this session online and the practical aspects to consider for all.

Thank you to Dr. Mona Iyer, Prof. Meera Mehta, Prof. Dinesh Mehta and Siddh Doshi for inviting me to give this lecture at C-WAS, CEPT University in Ahmedabad. Thank you to Prof. Barbara Evans for making the introductions to make this lecture possible. Thanks go to the Sanitation Learning Hub at the Institute of Development Studies for commissioning and making this research possible, and to all of the researchers and their participants who provided the material for this lecture, and a special thanks to Brian Reed and Zara Ansari for their valuable video contributions for the session.

Ansari, Z. (2017) Understanding the Coping Mechanisms Employed by People with Disabilities and their Families to Manage Incontinence in Pakistan, MSc Thesis, London: London School of Hygiene and Tropical Medicine

Black, M. and Fawcett, B. (2006) The Last Taboo: Opening the Door on the Global Sanitation Crisis, London: Earthscan

Blackman, A. and Fairey, T. (2014) The PhotoVoice Manual: A guide to designing and running participatory photography projects, https://eclass.hmu.gr/modules/document/file.php/YK128/PV_Manual.pdf (accessed 04 June 2020)