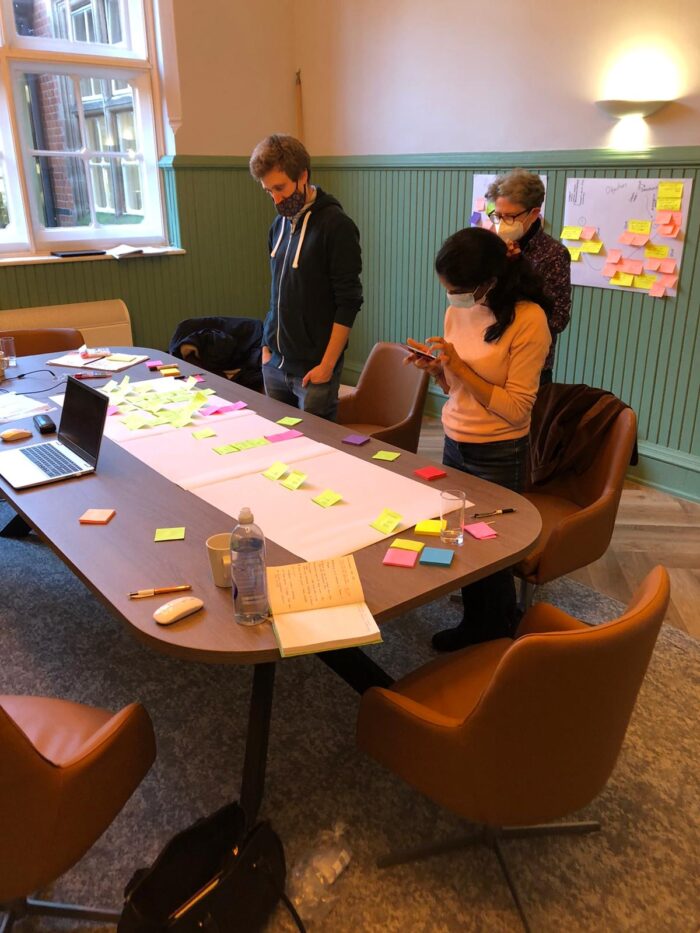 On Friday 14th January 2022, members of a team leading a project on the experiences of older people with incontinence and their caregivers in humanitarian settings in Ethiopia and Malawi funded by Elrha and the Sanitation Learning Hub, and led by Oxfam GB and HelpAge International, met in person for the first time at a workshop in Leicester, UK.  The research was conducted in Kule and Nguenyyiel humanitarian camps in the Gambella region of Ethiopia, hosting refugees from neighbouring countries, and parts of Malawi which were affected by Cyclone Idai, with partners including Malawi Network of Elderly Persons Organisation (MANEPO), St John of God Hospitaller Services, Malawi, and the Hygiene and Environmental Health Directorate of the Federal Ministry of Health in Ethiopia.

Piecing together the data analysis

Over the last few months, the analysis process has enabled the team to gain new insights into the challenges faced by older people with incontinence and their caregivers in these settings and the barriers to and support required to address them. The data gathered was analysed in the field by the teams, then in the UK using NVivo software. The workshop gave the team the opportunity to reflect on the key findings of the research. We worked together to ‘sort through’ the codes emerging from the data, categorising them using  post-it notes and  a sheet of flip chart paper for each of the larger themes. As the day went on, a detailed picture emerged as post-its populated flip charts around the room, changing position several times and being connected by arrows, and the workshop resulted in the team being able to see a clearer picture about how the data will be presented in a report and other outputs.

Reflecting on process through time(lines)

A significant part of the workshop focussed on reflections on the research process. The COVID-19 pandemic has meant that the data was largely collected through remote research, with only one member of the UK-based team being able to travel once to Malawi and twice to Ethiopia in 2020, as opposed to the multiple trips that were planned to both settings. The research was therefore largely conducted remotely, with the UK-based team training enumerators and reflecting on data collection over Microsoft Teams. To understand the experiences of older people with incontinence and their caregivers in humanitarian settings, the enumerators in both countries used a range of participatory methods such as interviews, focus group and small group discussions and ranking exercises. As discussions unfolded in this workshop, the team plotted a timeline of activities using post-its. For the first time, the impacts of the COVID-19 pandemic on the project became visualised; the volume of post-it notes of different colours increased as time went on, resulting in a significant accumulation on one end of the timeline, compared to the other. Ethical approval for the research was obtained a very long time before a team member was eventually able  to set foot on Ethiopian and Malawian soil. The team used the timeline to reflect on each stage, asking ourselves key questions: What went well? What could have been improved? What were the challenges, and how did we resolve them as the project went on? These reflections allowed us to take stock of a project which we had each invested so much energy into, and have had the privilege of witnessing it flourish in a socially-distanced era despite being faced by challenges such as travel restrictions, with lots of lessons to learn for future work. We reflected on the need for research methods to be as simple and as participatory as possible for older people to be involved in the research and for tools to be practical to use for enumerators. The team recognised that this project sought to ‘develop a practical and sensitive methodology to understand the experiences of older people with incontinence in humanitarian settings’. Our discussions over the course of the day led us to conclude that whilst the methodology was sensitive, there is room for greater exploration on how it can be made more practical.

The workshop concluded with a look ahead to what lies next. The findings from the study have been analysed, ready for us to tell the stories of the older people and their caregivers who gave their time to share their experiences for the first time. As a team, we reviewed a dissemination plan and planned next steps, which will unfold in the coming months ahead. The day concluded with a group photo.