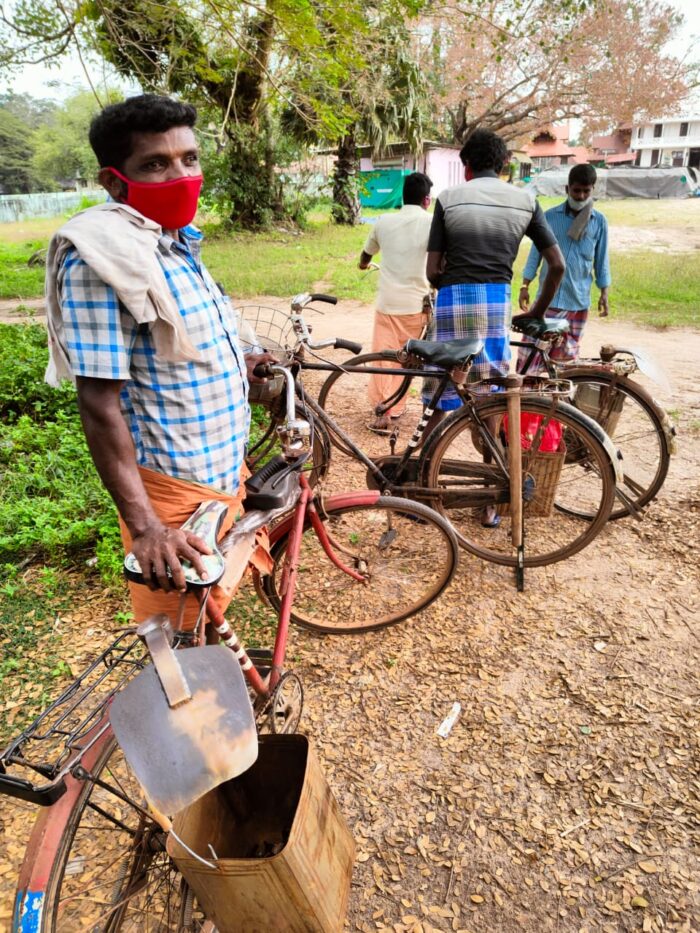 This blog was written for the Brown Gold project at the Institute of Development Studies. The original post is available here.

The Brown Gold project explores the ways in which faecal matter — which is rich in water, nutrients and organic material — can be reimagined as ‘brown gold’. By doing so, we can enhance the livelihoods of all people living in off-grid communities. Yet, in contexts where toilet facilities require manually emptying, greater attention must be paid to those involved in extracting human excreta: sanitation workers. Achieving this means we better need to understand the ways in which workers are marginalised.

We need to look beyond the end user

The explicit recognition of the human rights to water and sanitation became the driving force in focusing on designing and building sanitation infrastructure to serve the needs of women, menstruating girls, and people living with disabilities. But to truly realise the potential of brown gold, we must also focus on the service providers.

Sanitation workers often live in slums and ghettoised settlements. There have been reports that they have been denied their own toilets through India’s flagship government-led sanitation programme, the Swachh Bharat Mission, due to caste-based discrimination. Addressing marginality requires explicitly addressing the living conditions of workers that collect faecal sludge to ensure that their welfare — literally — begins at home.

The continued construction of unsewered pit latrines that require emptying has only propagated the need for manual scavenging, despite calls from activists to end this illegal practice. Consequently, caste-based exploitation of Dalit manual scavengers persists and has been exacerbated, hidden behind the façade of millions of newly built toilets.

A lack of rights and protective equipment makes their work incredibly hazardous, and often deadly. Across South Asia, workers on low incomes continue to enter dangerous pits and put their lives at risk. In India, it is estimated that one sanitation worker dies every five days through drowning, after falling unconscious from toxic gases after entering sewers and septic tanks. Provision of well-fitted personal protective equipment is a start, but supplying gloves and boots is not enough. The vulnerability of sanitation workers from marginalised castes is compounded by poor access to alternative livelihood opportunities.

We need to look at how caste intersects with other identities

Individual identities of sanitation workers beyond their caste are rarely recognised. Gendered divisions of sanitation labour create nuanced challenges for men, boys, women, girls, and transgender people. Brown Gold research from Gulariya in Nepal, and Nanded in India, shows that whilst men and boys put their lives at risk as they descend into sewers and septic tanks, women and girls sweeping the streets often deal with multiple gendered-demands out of sight.

From adolescence to the onset of the menopause, access to facilities for menstrual hygiene management is imperative for women workers. Recognising the needs of mothers to breastfeed their infants and meeting childcare needs as they work is key to supporting female workers. A truly gender-sensitive, waste-orientated circular economy would ensure benefits of maternity leave, fair wages and other income generation routes, rights to health insurance, flexible working hours, support for widows who lose their husbands to manual scavenging through ‘sewer deaths’, and retirement benefits for sanitation workers.

Inclusive recruitment practices could also help increase the visibility of sanitation workers with disabilities and their needs. Support is limited for workers who have been left with life-long disabilities due to injuries in the line of work. This has led to grassroots campaigns to demand compensation for workers in parts of India such as Ludhiana of up to 1 crore rupees ($250,000). At present, efforts in Tamil Nadu to scale up innovations in technology to mitigate against the region’s record of the highest number of sewer deaths in India, such as sewer-cleaning robots including the Bandicoot, and Gulpers and mechanical trucks such as Vacutags, are reaching some municipalities.

We need to look towards brown gold

Ensuring the safety and dignity of sanitation workers is essential as turning faecal matter into brown gold begins to be realised at scale. We need to explore more on how to facilitate faecal sludge reuse without further deepening sanitation workers’ marginality.

As well as providing fertiliser, water for crops, and energy, sanitation workers on low wages can benefit from the reuse of faecal waste to support income-generating activities other than pit emptying.

We need a rights-based approach

In exploring opportunities to recover value from faecal waste, decisive action is needed to address marginality of the people contributing to maintaining sanitation infrastructures. In South Asia, being from lower caste backgrounds is a key marker of marginalisation for sanitation workers. Further recognition is needed of how workers’ genders, ages, disabilities, and the wider circumstances in which they live shape their lives within and beyond the pits, dumpsites and streets. This is a long-term process which will require action to actively consult with workers and wider communities to identify and tailor best practices to address issues of marginality.

Here are five fundamental steps we can take to address the challenges faced by sanitation workers:

It’s high time we look beyond sanitation service users alone, and start to address equity and inclusion for those who deliver and maintain sanitation too.